Think of the last time you said, “Because I said so!”

If you are a parent, chances are it wasn’t that long ago. When I tell my kids’ “no”, it is because I have the wisdom and life experience to know what puts them in harm’s way and what would not be beneficial to their well-being. But sometimes I just don’t feel like explaining all the life lessons and it’s easier to say “no” followed by “because I said so” when they ask “why?”.

This leaves them angry and confused and I soon remember that it is my job to take the time to explain my reasoning. When they were little and put their fingers near the flame of a candle, an emphatic “NO” was the correct response. Now that they have developed cognitive reasoning skills, I know they will better accept my decision (even if they don’t like it) when they understand it.

One of my co-workers and I were having a spirited but respectful discussion about following a supervisor’s orders within the police department. During our exchange, I advised my colleague that we should explain the reasons behind our directives. He asked simply, “Should we have to?” I thought momentarily and answered with an insistent, “YES!”

Whenever possible, those who make rules or policies that they expect others to follow should take the time to explain their reasons. The only exception is when it is an emergency situation and there is no time to question – only time for action. It is no different than keeping a child from burning themself.

In policing, I would not want an officer questioning a commanding officer in the field in the middle of a serious incident. There is a time and a place to question operational decisions and during the operation is not the time. However, the majority of the time, we are not operating in an emergency mode. Rather, we are writing policies and enforcing rules and directives as a result of non-emergency situations that arise.

My philosophy is that wherever and whenever possible, anyone who implements a directive should explain why it is being enacted. I think we have a tendency to fall back on our formal authority or titles when telling someone to do something. When people reach the level of decision maker in their organization, it is far easier to put out a memo or directive that barks the order. It takes more time and energy to provide the transparent thought process behind the rule. Truth be told, it sometimes becomes exhausting to do the latter.

I fielded a complaint several years ago against a patrol officer whom I supervised. A mother said her son was pulled over on a traffic stop so she drove to the location and began to approach the officer to give him her son’s proof of insurance. The officer immediately yelled at her to get back in her car and would not listen to her explanation. Her complaint was that the officer was rude.

When I explained to her that traffic stops are the most dangerous encounters for police officers and he perceived her as a threat to his safety as she approached him from behind, it was as though a light bulb went off in her head. She understood that her charging in his direction was reason for him to raise his voice to her.

That officer was not wrong in barking the order because he perceived her as a threat. However, after the stop had concluded, the officer could have followed up with the mother and explained his actions. Had he taken the time to do so, she would not have filed the complaint. 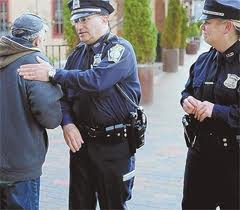 It takes a lot more time and energy to explain the rationale for your decisions. But I have found that people are generally reasonable if you use communication instead of notification.

Posted by Kristen Ziman at 8:39 AM

Interesting point. I would argue that the public sees law enforcement as non-courteous for the most part. That perception can be changed. Though I'm not sure there's any interest in changing that.

I will right away clutch your rss feed as I can not find your email subscription
link or newsletter service. Do you have any? Kindly let me realize so that I may subscribe.
Thanks.

Great Post. I like the term communication v. notification. I also take the time to explain and see it as an investment in each officer's future. My hope is that they too will exercise the practice of open and effective communication.
We are great at speaking TO people and not so skilled at speaking WITH them.
We can change.
Thanks,
Chief Scott Silverii