Don't Believe Everything You Think

Philosopher Bertrand Russell once said, “In the modern world the stupid are cocksure while the intelligent are full of doubt.”

I adore this quote because I see examples of it every day from people who deal in absolutes. That is, people who are always so sure of their own point of view and simply cannot (will not) take a moment to question their own assumptions.

In the book, “You are not so smart”, author David McRaney points out that all of us have a deep desire to be right all the time and an even deeper desire to see ourselves in a positive light both morally and behaviorally. We can stretch our minds pretty far to achieve these goals. We rationalize our points of view and we seek out ways to support our own viewpoint. It’s relatively easy to do.

All around us we can find support of our assumptions. Take the concept of self-fulfilling prophesy (also called “labeling”) as an example. If someone believes you to be a certain kind of person, you tend to live up to their expectations and they will find ways to support their beliefs. If I think you are a jerk, my demeanor towards you will be hostile, thereby causing your response to be jerkish (is that a word?) and thus, you will have validated my belief that you are in fact, a jerk.

It also works in the opposite (called the “halo effect”). If I believe you to be a good person, I will unconsciously gather evidence to support that assumption and keep you in a favorable light while ignoring that which might not fit into the template for which I have devised for you. And if you do something that does not support my perception of you being a good person, I will justify your actions and make excuses for them.

We are all masters at manipulating the world to align with our beliefs.

Police officers have to be especially careful not to fall prey to these assumptions. Just because a person breaks the law does not necessarily make them “criminal” or evil. The problem is when we make unfair judgments about the majority based on limited experiences. We must not paint everyone with a broad brush because no person fits into a precise template.

I have found that people won’t normally challenge their own assumptions without some sort of prompting. It usually takes something significant that causes us to audit our beliefs about something we feel strongly. In my experience, the one thing that is powerful enough to alter the lens through which we see the world is when something affects us personally.

I have an uncle who is prejudice and intolerant against people of color. Growing up, I remained silent when he made ignorant comments but once I found my voice as an adolescent, I started challenging his beliefs -- to no avail. He was immovable and unaffected by my accusation that his biases lacked logic or reason. That is, until something impacted him personally to transform his beliefs.

Last winter, my uncle was hospitalized for a minor health issue leaving my aunt to tend to the house alone and as bad luck would have it, during a large snowfall. Their neighbor (who happened to be black) took it upon himself to shovel their driveway and even carried groceries in for my aunt when he saw her struggling.

My uncle learned of this and was touched but confused. His neighbor’s actions were in direct conflict with my uncle’s belief system but an act of human kindness forced him to see what he did not see before – that his view of the world was distorted. 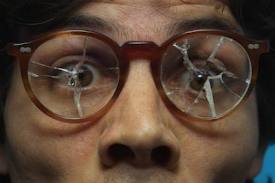 If you ever find yourself so certain that you are right about a particular belief or feel disdain for a person (or group of people), seek out experiences that challenge you to see things differently.

You just might need a new pair of glasses.
Posted by Kristen Ziman at 1:23 PM

Do you have a spam problem on this blog; I also am a blogger, and I
was curious about your situation; many of us have developed some nice methods
and we are looking to swap strategies with others, please shoot me an e-mail if interested.

"I have an uncle who is prejudice and intolerant against people of color. Growing up, I remained silent when he made ignorant comments but once I found my voice as an adolescent, I started challenging his beliefs -- to no avail. He was immovable and unaffected by my accusation that his biases lacked logic or reason. That is, until something impacted him personally to transform his beliefs."

Come work in #007 for a few months on the actual street and I bet you change your mind.

I'm not sure where you are getting your information, but good topic. I needs to spend some time learning more or understanding more. Thanks for wonderful info I was looking for this info for my mission.