"Fight or Flight" and why it Matters in Policing

The “fight or flight” phenomenon is our body’s innate response that prepares us to fight or flee from a perceived or actual threat of harm.  Often times, we don’t know what our primitive reaction will be until we are thrust into a situation that evokes fear.  If you’ve ever been the subject of a practical joke where someone jumped out and scared you in surprise, chances are you either started swinging or you ran away from the threat (some people literally freeze and become paralyzed with fear but I’m not sure how that reaction fits into the theory).  Each of these responses is our body’s natural way of protecting ourselves and we instinctively react the way we are wired.

In the videos that captured the terrorist bombing in Boston, you can literally see “fight” or “flight” in action.  Some people ran away from the blast while others ran towards it.   The “fight” people began tearing down barricades and jumping over them to tend to the injured.

The profession of law enforcement requires that you be a person of natural “fight” instinct.  This doesn’t mean one should be aggressive as the terminology might infer.  Rather, it means that in those situations where fear and threat is present, a police officer must have the ability to act in spite of it.  It is this very instinct that takes over when officers run towards the gunfire, jump into a pond to save car accident victims or immediately spring into action when bombs explode in the streets of a populated marathon. 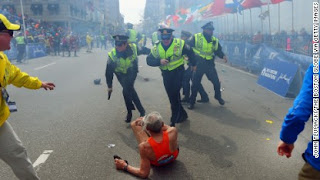 Instinct and the “fight” response alone is not enough.  It is these natural tendencies that cause one to gravitate towards law enforcement but it is the training given to first responders that elevate them to the level of action.  Our commitment to a higher level of training is the perfect marriage of skill and instinct.
Police are trained to understand that if there is one explosion, there is a strong likelihood that another will follow.  Where there is one bad guy, we must automatically assume there are more.  Even with this mindset, people of action put their personal well-being aside to tend to those who are injured and ignore personal risk in doing so.

“Fight” or “flight” are two very different ways of responding to stress and those whose natural instinct is to run away from the threat does not make them cowardly.  It is simply the survival method inherently hard-wired within them.  Some people will seek safety and shelter to protect themselves and there is nothing wrong about that response.  Some may even say that it is the wiser of the two reactions because it reduces the risk of harm.  However, these individuals would not likely flourish as police officers, firefighters or first responders.

I have always thought public safety to be a higher calling.  I believe this because people of action are drawn towards service professions like policing and firefighting because there is something inside of them that desperately desires to serve others while simultaneously protecting them.  It is these needs combined that make up the servant heart and the warrior spirit.

When the servant heart and warrior spirit are present, there is a greater purpose that transcends the individual.  After feats of heroism, we often hear police and fire personnel downplay their actions and describe their reaction as instinctual.  They didn’t consciously make a choice to act or even weigh the risk of acting – they just did what was needed to be done in the moment.

This profession not only requires people of action but also those who understand the awesome responsibility that accompanies the position.

Servant hearts and warrior spirits are all around us and I’m grateful for those men and women – the boots on the street -- who answered the higher calling and honor the badge and the nobility of policing every day through their action.