Don't You Dare Give Up on This Life

*I never published this post because the officer asked me not to do so out of respect for his family. He contacted me and said he's ready to share his story because he believes he can help other officers who are in pain. The original post had his name changed. This is his real name and this is his story.


Today is a great day.

Over a year ago, one of my officers nearly committed suicide, and today we found out he gets to return to full duty.

It was after midnight and Pete retrieved his unloaded service weapon, held it to his head and pulled the trigger just to hear it “click.” In an act in furtherance, he loaded the pistol and left his house intending to finish the job outside so his wife and kids wouldn’t find him. In a final act of reconciliation, he decided to call his sister-in-law and made a pact with himself that if she answered, he’d let her talk him out of it. But if she didn’t answer, he was prepared to end his life.
She answered.

I want to pause here for a moment and thank whatever higher power aligned the stars so she would answer the phone after midnight. When I ponder the alternate outcome had his call gone unanswered, I would be telling a different story.

His sister-in-law convinced him to phone a peer officer who happened to be on duty that night. He responded and convinced Pete that he needed to seek treatment. Pete went willingly to the hospital and voluntarily admitted himself for inpatient treatment at a mental health facility where he remained for five days and engaged in individual and group therapy.

After being discharged, Pete continued with outpatient treatment where he continued to get stronger and make progress towards wellness. I spoke with him several times during that time, and I was surprised by how open and forthcoming he was about his suicidal thoughts and what brought him to that moment where he nearly left this earth. He was facing his demons, and I felt with all my heart that he was prevailing.

It was shortly after that we received word that his Firearm Owners Identification Card (FOID) was being revoked under 430 ILCS 65/8(e) which prohibits a person who has been an inpatient in a mental health facility within five years from possessing a firearm.

This makes perfect sense to me. This is what we passionately protest when we hear of a mass shooting where a person with a mental illness was able to purchase a weapon. But there is a conflicting principle at play here and one that cannot be ignored.

Pete gained a medical release from his physician who found him fit to return to duty. I sent him to an independent medical examiner who came to the same conclusion, but because he was ineligible to possess a FOID card, Pete couldn’t work as a police officer. We filed an appeal with the review board of the Illinois State Police under a section of the law that provides relief to a law enforcement officer who did not act in a manner threatening to himself, another person or the public. They denied it based on his being a danger to himself, and this also makes sense to me. I do not for a moment begrudge the ISP review board for following the law.

Pete became overwhelmed by the stress of police work and the toll it takes on the family. He was walking around in distress and not one of us knew until he almost pulled the trigger that night. But it didn’t make sense to me that an officer like Pete who has worked as a police officer for over 20 years would lose his job because he asked for help.

But there is a liability and I get that. Imagine if the ISP were to give Pete his FOID card back and he did something unthinkable. There would be outrage and we would have no rebuttal given that the law is clear on the matter.

But having suicidal thoughts does not make a person mentally ill.

We decided to challenge the denial and filed for Pete’s case to be heard before an Administrative Law Judge. Pete’s attorney and all his supervisors in his chain of command testified on his behalf. I told the judge that I would not be advocating for Pete if I felt that he posed a danger or liability to our police department, his fellow officers, or the citizens we serve.

The judge agreed and felt that by a preponderance of the evidence that Pete was not a danger to public safety. Because the Illinois State Police has jurisdiction over the matter, it went to Director Schmitz who granted the petition. Pete returned to work and is flourishing. In fact, I feel that Pete is stronger having come out on the other side of this.

I fear this incident has sent an unspoken message to police officers that the last thing you can do when you are having dark thoughts is to ask for help. Rather, it’s contributing to the stigma in law enforcement where we pretend we are unaffected by the film reel of tragic events that plays over and over in our heads.

I understand the liability. I really do. But I think the greater liability is with an officer who is a ticking time bomb and refuses to seek help for fear of losing his or her job. Since this incident, we lobbied for legislation to be changed. Governor Bruce Rauner signed House Bill 5231 into law which prevents police agencies from requiring a FOID card as a condition of continued employment. But that doesn't change the culture where many still believe it is a stigma to be associated with the thought of suicide.

Some people think it’s weak to ask for help or to admit when they are overwhelmed. The truth is, there is nothing weak about it. It took great courage for Pete to call his fellow officer and ask for help and I think it’s time we honor courageous acts rather than punish them. 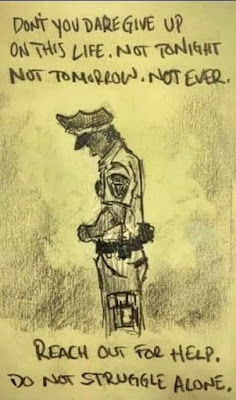 *If Pete's story is your story, reach out for help now: https://weneverwalkalone.org/log-in
Posted by Kristen Ziman at 11:34 AM

I so grateful for your courage to ask for help in the darkest hour Officer Pete.
Your story is a great inspiration to those who are having similar ideation and feelings of giving up.

Thank you so much
God has big plans for You.

My wish for first responders is that mental health guidance be available before they get to this point and that asking for a sabbatical for mental health be an option with out jeopardizing their jobs.

God bless all our first responders!

Thank you for this compelling story. As someone who has been in law enforcement for 17 years and emergency services for 23 years, I unfortunately have seen stress take its toll on too many good people. I have the opportunity to speak to a group of policy makers for my state next week and you brought up some great points that I want them to hear. Thank you and officer Pete for being willing to share this story. Stay Safe!

A wonderful read and an amazing outcome.