There is not a person among us who has not been wronged or hurt by someone. Whether it be a person with whom we are in a romantic relationship, a member of our own family or a friend we consider to be part of our tribe, harms happen all the time.
Some harms are minor and unintentional and occur because of miscommunication or expectations that weren’t realized. This is the kind of conflict we find ourselves in often, if not daily. Misunderstandings and disagreements are part of the human experience.
Just yesterday, my spouse asked me to grab the paperwork we needed for an appointment from the kitchen counter. The day before, I put that paperwork in a folder and placed it in my den so when we went to leave, I grabbed the folder.  We found it empty when we got to our appointment.
“I TOLD you I put it on the counter so we wouldn’t forget it!”

“I put the documents in the folder where they belong. Why would you remove them from the contained folder so loose papers are strewn around?”

“I specifically advised you that I removed the papers from the folder and placed them on the counter – so we wouldn’t forget them.”
Ugh. There we were without the paperwork we needed because I didn’t hear (listen) to her tell me that she moved them. We were an hour from home and couldn’t turn around and our appointment was in 20 minutes. We immediately went into problem-solving mode and located a hotel nearby and re-printed out the paperwork in the business center. High-fives. Even after that, I quipped that she shouldn’t mess with my organizational system. I couldn’t help myself. That led to her chastising my listening skills. We were literally pulling into the parking lot on time with the correct paperwork and started laughing at the absurdity of fighting about it.
That’s the stuff of life. We are all trying to navigate through a messy world with other humans who have different methodologies and mindsets, so conflict is inevitable. Add temperaments and adaptability (or lack thereof) and it’s a recipe for a spark to become an explosion.
Seemingly small conflicts can turn into big rifts if we aren’t careful. As a police officer responding to family disputes, I have heard countless stories of people not talking for years over a minor argument. As preposterous as that feels to me, it happens so frequently, and ego is the culprit. We wait for the other person to apologize and when they don’t, brick by brick we build walls that become impenetrable.
But what about harms that go far beyond a misunderstanding or failed communication? How do we overcome the pain associated with being a victim of someone’s deliberate and willful betrayal? When intimate partners break trust by being unfaithful or a member of your tribe does something they know full well will break your heart. What then?
I have been genuinely betrayed by people I thought were my friends or by those I’ve loved, and my default is to slam the door and move on. I have chosen not to forgive. I have even found myself plotting vengeance because I wanted them to experience the pain I was feeling. In each of these instances, I have thankfully come to my senses without a step in furtherance. I believe that living well is the best revenge and that mantra has served myself and our family well over the years.
Some might say that certain transgressions are unforgivable and that’s true depending upon your threshold for forgiveness. Sometimes a line is drawn and stepping over it serves as grounds for severing the relationship. Overcoming harms that break trust with our partner, family, or those in our inner circle requires the deliberate will to forgive those who have broken our hearts. The person who was wronged must make the conscious decision to forgive.
Before that can happen, there must be a sincere and compassionate apology by the person who has committed the harm. When a person acknowledges a transgression and offers that they were unequivocally wrong and asks how they can make it right, there is nothing more that can be done. The caveat is that err must not be repeated or the apology is null. You can’t be genuinely sorry and do the same thing again. But when someone earnestly atones, forgiveness should never be withheld.
Those who can’t forgive are doomed to everlasting pain because that stuff is heavy. Carrying hatred and vengeance weighs you down. You think you are in control by withholding forgiveness, but you aren’t. The energy has now transferred and the person who is sincerely sorry gets to move on with the understanding they’ve done all they could to right the wrong. At that point, it becomes the responsibility of the person harmed to let it go.
And if the person never reaches out to tell you they are sorry, that's okay. You can still find peace within yourself. I use it as a lesson going forward to remind myself what not to do to someone else.
When I ponder the betrayals I’ve experienced and start to feel the familiar anger stirring inside me, I needn’t look far for perspective. Dallas police officer Amber Guyger killed an innocent man. She shot 26-year-old Botham Jean in his own apartment, where he'd been watching football on TV. At the time, she was still wearing her uniform as a Dallas police officer, having just come off a double shift. Guyger said she entered Botham Jean's apartment by mistake believing it was hers (his unit was one floor directly above Guyger's in the same building). I struggle to comprehend this entire incident, but it happened.
During the trial, Botham’s brother, Brandt, gave an extraordinary response to the murderer. Brandt said, “If she is truly sorry for what she did, I forgive her and want the best for her.” Then he did something inconceivable.
“I don’t know if this is possible, but can I give her a hug, please?”
The two shared a hug and the only noise in the courtroom was the sounds of sobbing. 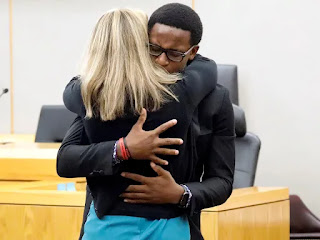 There are three parts to an apology:
I’m sorry.
I was wrong.
What can I do to make it right?
If this man can show grace and forgiveness for the unthinkable, so too can we. It’s not too late to say you’re sorry or to forgive someone who has hurt you.
Posted by Kristen Ziman at 8:59 AM No comments:

What Do You Want From Your Police Officers?

The Associated Press just reported that police officers in Connecticut would be prohibited from stopping drivers for a broken headlight, displaying their license plates in their back windows, and other minor violations, under recommendations approved Tuesday by the state Police Transparency & Accountability Task Force. According to the AP, some of the task force members said they hope restricting police from stopping drivers for ‘secondary’ violations curbs the disproportionate stops of minorities and decreases confrontations where police use force on motorists.

The primary function of a law enforcement officer is to (wait for it..) enforce the law. Laws are made by lawmakers. Cops don’t make the laws. My first instinct when I read the blurb in the AP is to remove laws that you’d not like to be enforced.

A great example is shoplifting. The law says it’s a felony to steal merchandise with a value exceeding $300. Ask any police officer when they got felony charges approved for a person caught with stolen goods valuing that amount. In fact, it’s become commonplace for State Attorneys to release shoplifters with no charges. This emboldens thieves to steal because there are no consequences for doing so. In short, crime does pay.

Vehicle equipment and administrative violations are commonplace and police officers are responsible for enforcing these infractions. These requirements are set forth by the respective state and they annoy me just as much as they annoy you. I hate the cost of renewing my license plate sticker and I just got pulled over in Florida because my license plate cover was obstructing my plate. But these are still laws by which we all must abide. I immediately removed my license plate cover in order to comply because I respect the law.

If you don’t like the laws, lobby your legislator to change them. If you think stealing is okay, start a movement to eradicate retail theft from the big book of laws. If you don’t want to adhere to vehicle equipment standards and administrative bureaucracy, get an army of people to protest your representatives and strike those laws from the vehicle code. For the record, officers who pull over minorities for the sole reason they are minorities have no business being in our profession. IF that is happening on a police force, traffic stop data collection required by police officers will reveal that pattern. Deal with THAT.

But don’t tell police officers not to enforce laws that they are sworn to uphold.

Chicago police officer Ella French was killed, and her partner is in critical condition after they were shot by occupants of a vehicle that they pulled over for expired license plates. Pause. They were enforcing the law. The occupants had loaded guns inside the vehicle and opened fire on the officers. Every molecule in my body wishes the vehicle owner would have had valid plates. Had that happened, the traffic stop would have never taken place and a twenty-nine-year-old police officer would still be alive.

In addition to the “minor” violation, they were driving around with illegally possessed, loaded firearms. Had the traffic stop never occurred, who might they have turned the gun on? We can never know how the story might have unfolded differently. These minor equipment violations often lead to the seizure of weapons that officers confiscate. You can reasonably make the correlation that every illegal weapon seized lowers the probability of it being used to harm someone. It’s simple cause and effect.

You (the collective society) need to decide what you want from your police officers. The only thing I know for sure is that the police officers are out there doing their jobs. Those who fail to comply with laws (even laws with which you do not agree) are still subject to enforcement by law enforcement officers.